Skip to Content
Home Food Where To Eat in Reykjavik

Aimee Marie Leave a Comment on Where To Eat in Reykjavik

Besides the waterfalls, the landscapes and sheer beauty of Iceland, one thing I was really looking forward to, was all the things we were going to eat in Reykjavik. I’d spent the weeks leading up to our trip, stalking Iceland (and Reykjavik in particular) via Instagram and I’m so glad I did. If you’re reading this, then perhaps you’re planning to visit Reykjavik too (or like me, maybe you just love food!) so you’ll know by now that things on the island are expensive. It’s just the way it is. There are plenty of places to eat though, catering for a range of budgets and we didn’t have one disappointing experience or meal. If you’re planning a trip, then hopefully this rundown of places to eat and drink will help you, like social media helped me!

After soaking in the Blue Lagoon for hours on our first evening, it was getting late by the time we got ourselves back to Reykjavik. In fact, a lot later than we’d realised, thanks to the glorious midnight sun! We’d been travelling most of the day and hadn’t eaten since landing in Iceland.  It was almost midnight and most restaurants were closed and bars had stopped serving food, but luckily Eld Smiðjan came to the rescue with delicious stone-baked pizza that we took back to our hotel room.  Maybe it’s because we were hangry, but it tasted like the best pizza and garlic bread my taste buds had ever had the pleasure of meeting. 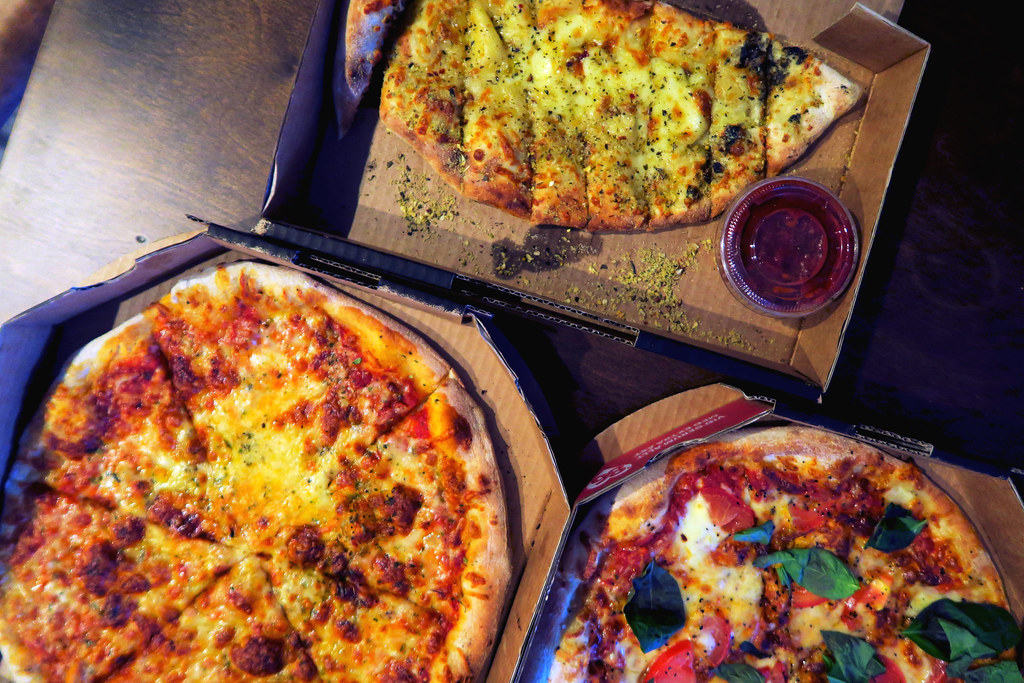 Sometimes, you just need a burger, don’t you? Lebowski’s is definitely the place for that. It’s a cool and casual pub / restaurant / sports bar, that is just a fun, loud and colourful place to be. In my opinion though, it caters for tourists more than locals, so if you’re looking for a traditional Icelandic restaurant, this isn’t the place! It’s probably somewhere you’ll want to have a White Russian too, if you’re a fan of the cult classic, The Big Lebowski! I went for the Lebowski (that’s a cheeseburger, to you and me) with fries and a drink, which totally hit the spot, after a long day of driving and checking out all that Iceland had to offer in the way of waterfalls! 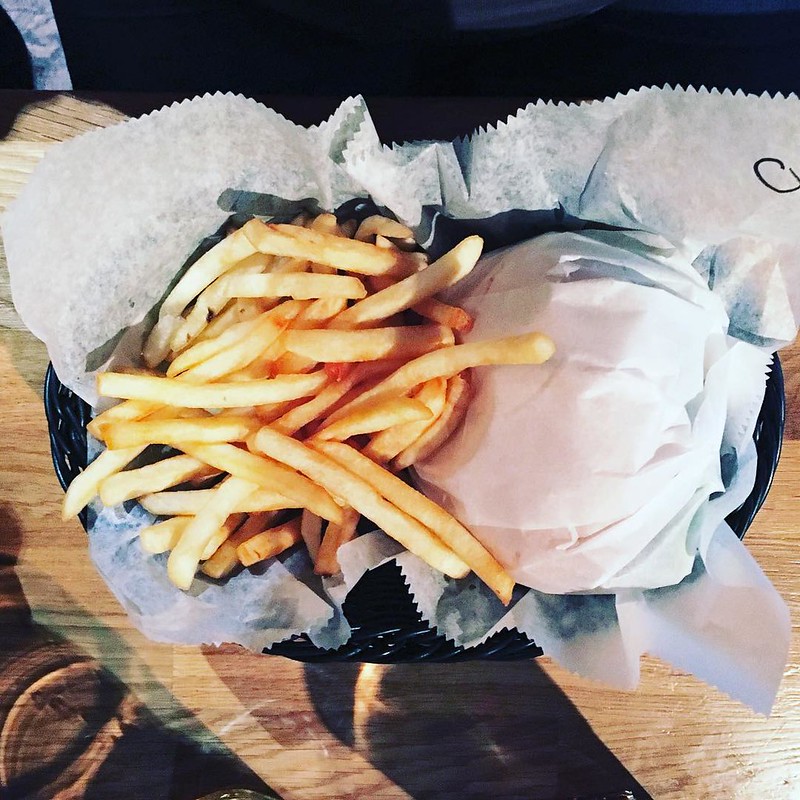 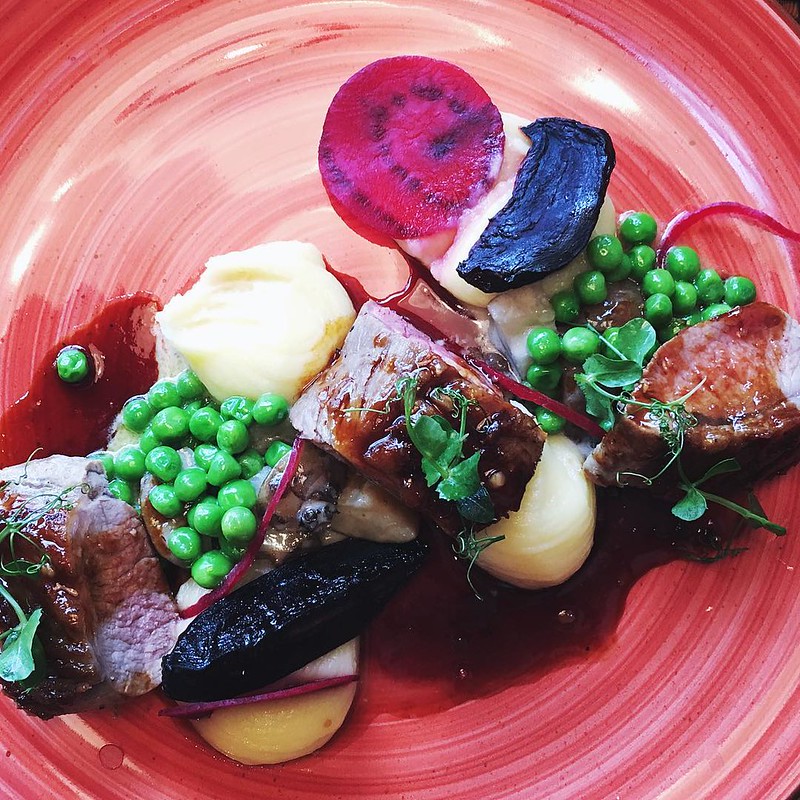 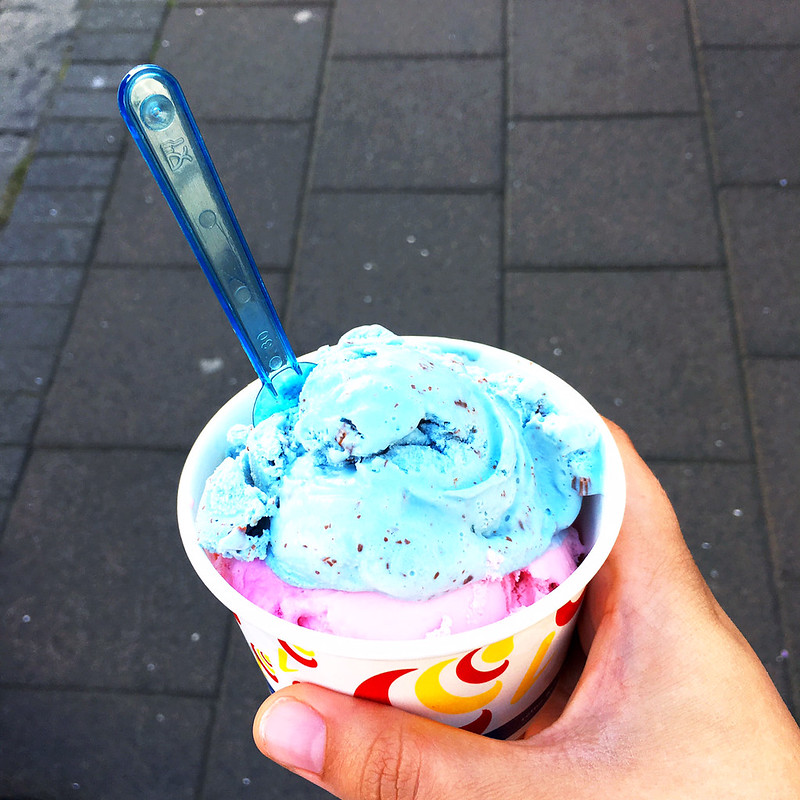 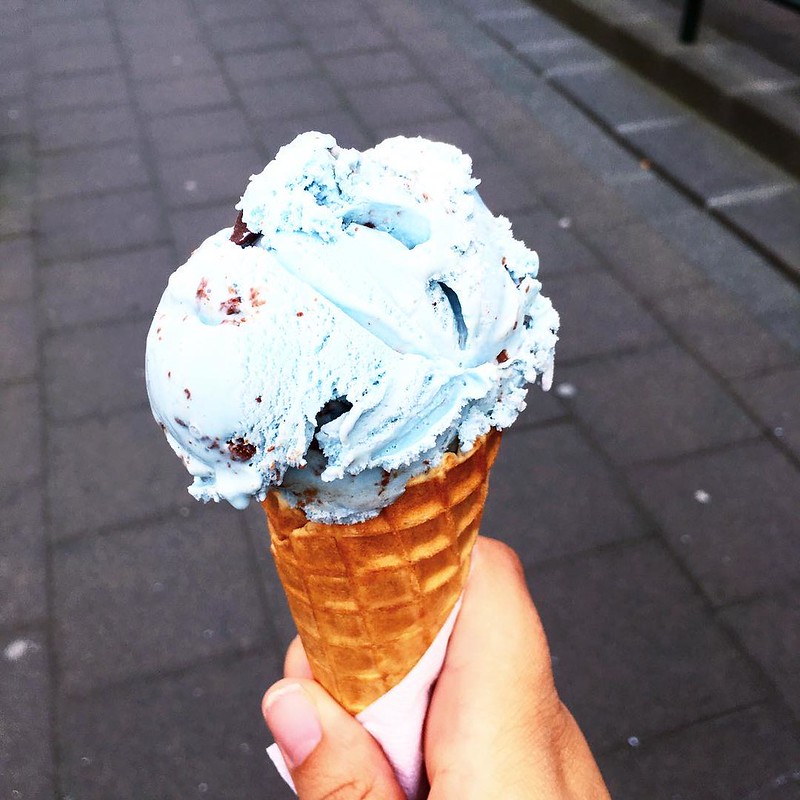 One place I wanted to eat, was Svarta Kaffið where they serve delicious soup in a bowl made of bread. Unfortunately, there was a long wait for a table (it’s popularity, I’m sure, partly to do with it being so delicious, but also due to it being so inexpensive compared to other places in the city!)

We had a stroll down the road and decided instead to go to Osta Búðin; an unassuming restaurant we’d walked past a few times in the previous days. The restaurant itself is attached to a deli and from the outside, looks humble and quiet. In fact, even on the inside, with it’s tartan chairs and laid-back style, it felt casual and cosy (which was just as well as neither of us had packed anything smart to wear at all!) but the food here was really tasty, from fresh fish and meats, to authentic soups and breads. The portions were small, but rich and delicious! Like most places across the country, it was quite expensive, but it was a price we were happy to pay for the quality of the food. I had smoked and cured salmon to start, followed by lamb fillet (which was the most melt-in-your-mouth lamb I’ve ever tasted!) and finished with Skyr Mousse (served in a mason jar, no less.)

If there’s one thing my husband loves, it’s ice-cream; I’m pretty sure he’d eat it for breakfast, lunch and dinner, if it was socially acceptable. And I feel the same way about pancakes! So when I stumbled across Eldur & Is on Instagram, I knew we had to go. It’s a coffee shop and ice-cream parlour that sells delicious flavoured ice-creams, milkshakes, crepes and coffee, to takeaway or eat-in; my mouth is watering at the thought! We went here three or four times during our short stay in Reykjavik, which I think is testament to the amazing, sweet and tasty dishes on offer. My personal favourite was the chocolate mint ice-cream (which was strangely more of a bubblegum blue hue, than green) and I don’t think you can go wrong with a Nutella crepe, either.

As much as it’s nice to be spontaneous when you’re on holiday, when you’re only in one place for a short amount of time, I think it can really pay off to do a little research beforehand too. Had I not seen Baejarins Beztu Pylsur on social media, then I don’t think we would have spotted it. I love a hot dog, so I knew we had to stop by this stand when we were near the harbour at Kolaportið flea market. It’s apparently the best hot dog stand in Europe! Yes. Please. It’s very popular so you can often find long queues, but we were lucky and only waited 5-10 minutes before devouring one with ‘all the works’ aka. ketchup, sweet mustard, fried onion, raw onion and remolaði! Delish. 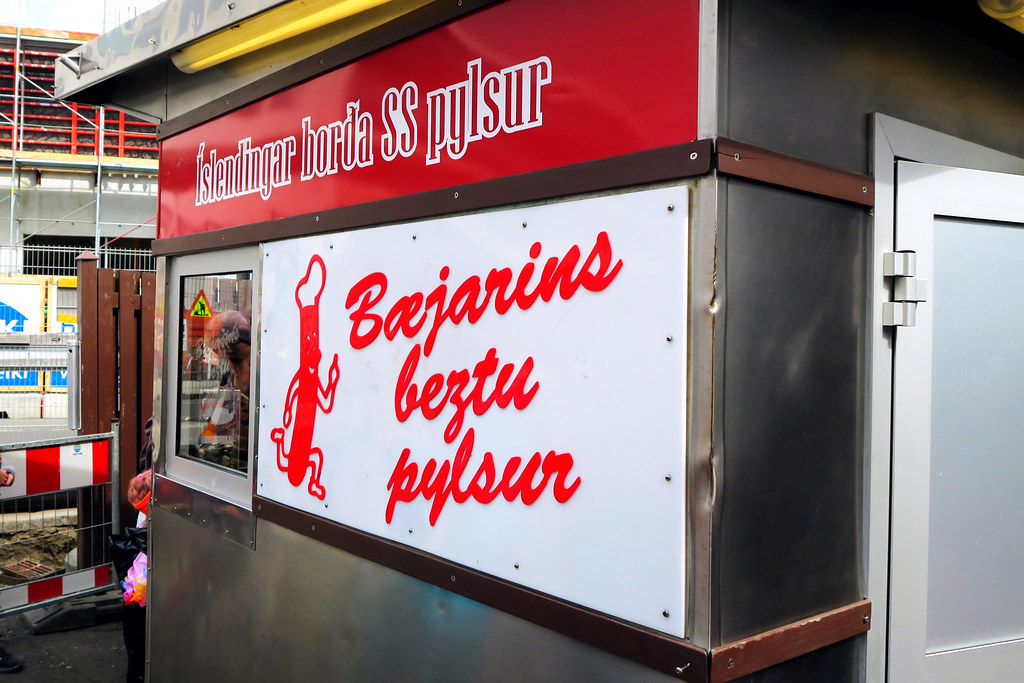 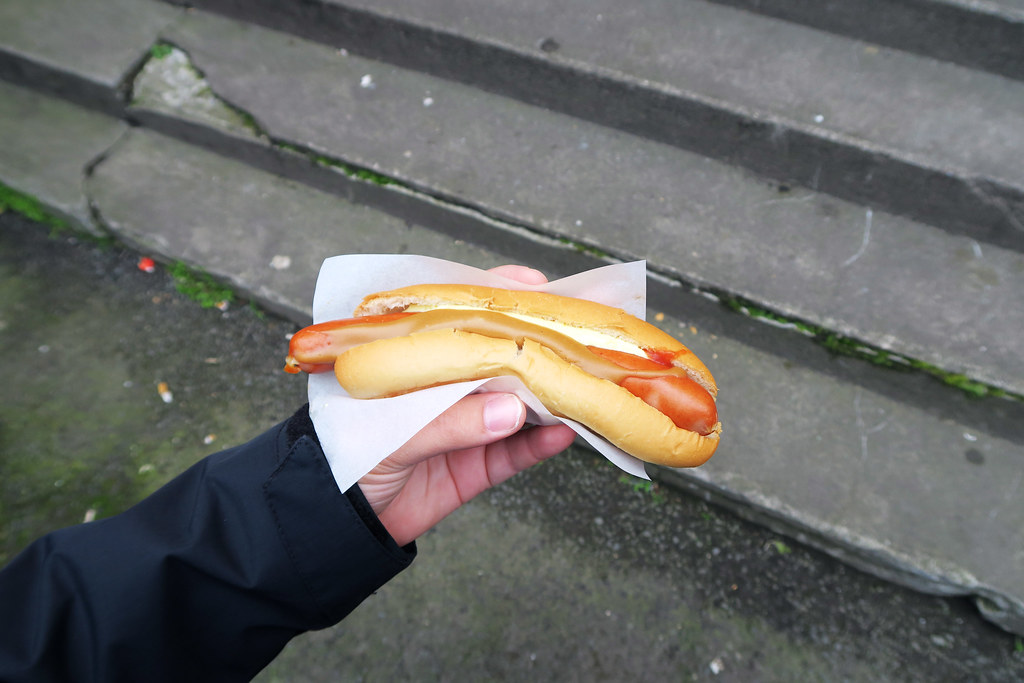 We stopped in Durum one afternoon and ate a nice simple lunch of paninis and french fries. There’s nothing on the menu that screams ‘Iceland’, but if you’re after a quick sandwich, wrap or pizza to sit down and eat or take back to your hotel room, then you can’t go wrong with this small and comfortable restaurant in the heart of downtown Reykjavik.

Across the road from our hotel, was the Sandholt Bakery, offering up pastries, sandwiches and breads to takeaway and lots more on offer, if you’re dining in too. We opted to grab a quick bite one morning while we went for a walk around the city and naturally I went for something sweet— a caramel covered cinnamon roll— whilst my husband had something savoury— a sandwich on black lava bread. There were amazing looking french waffles, Danish pastries, scones and Icelandic Donuts; I could have had one of everything! 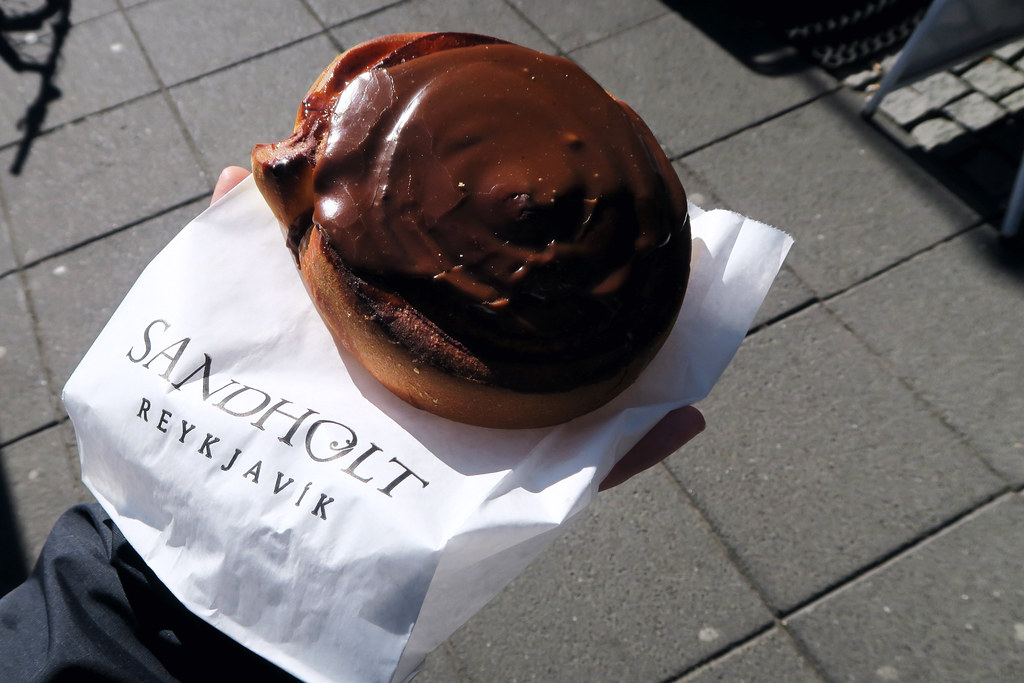 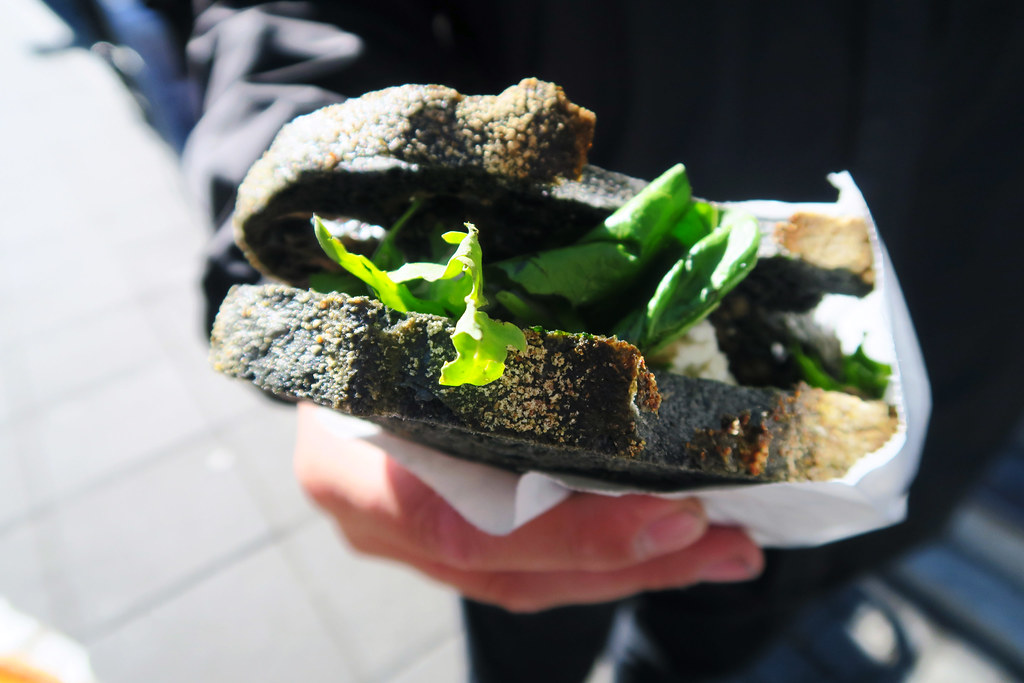 On our last morning, we went to Grái Kötturinn for breakfast; which is also Bjork’s favourite spot, apparently. And if it’s good enough for Bjork, it’s good enough for me! Let it be known, that if there are pancakes on a breakfast menu, then you can bet that’s the dish I’m going to order. I could judge a whole restaurant based on their pancakes. And Grái Kötturinn did not disappoint! Would you look at the size of them?! I discarded the half a block of butter and poured on the syrup that came in a separate jug, instead. 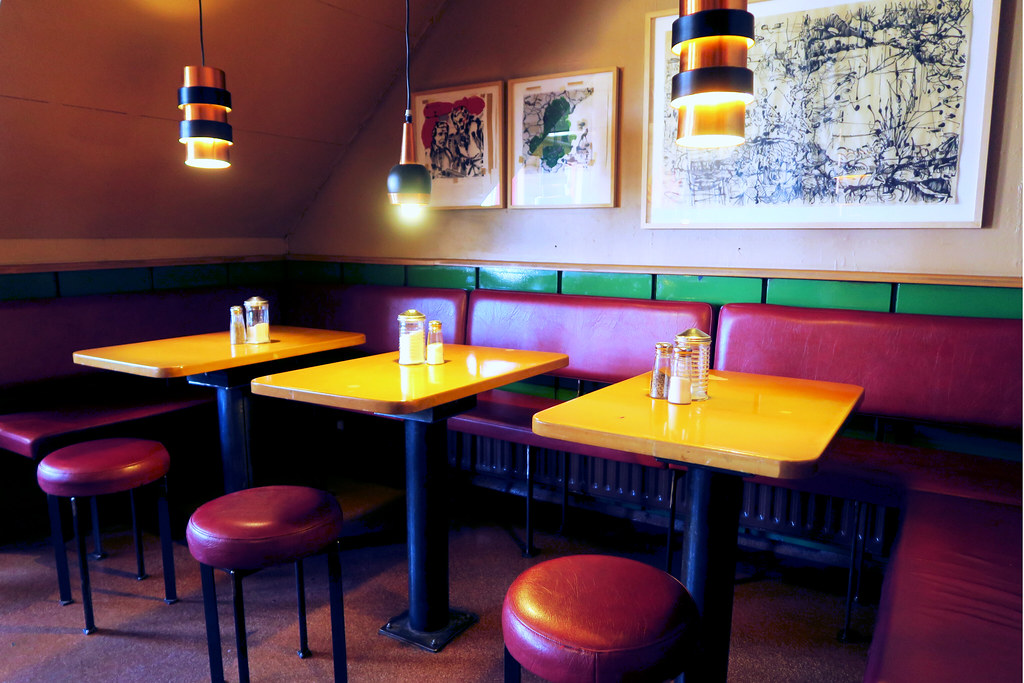 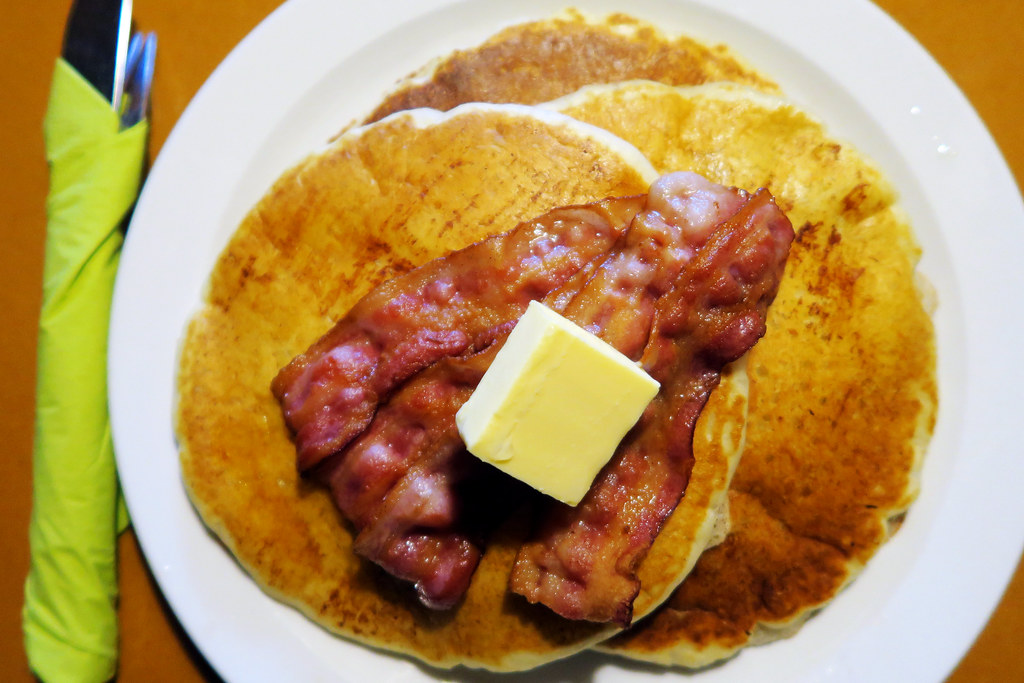 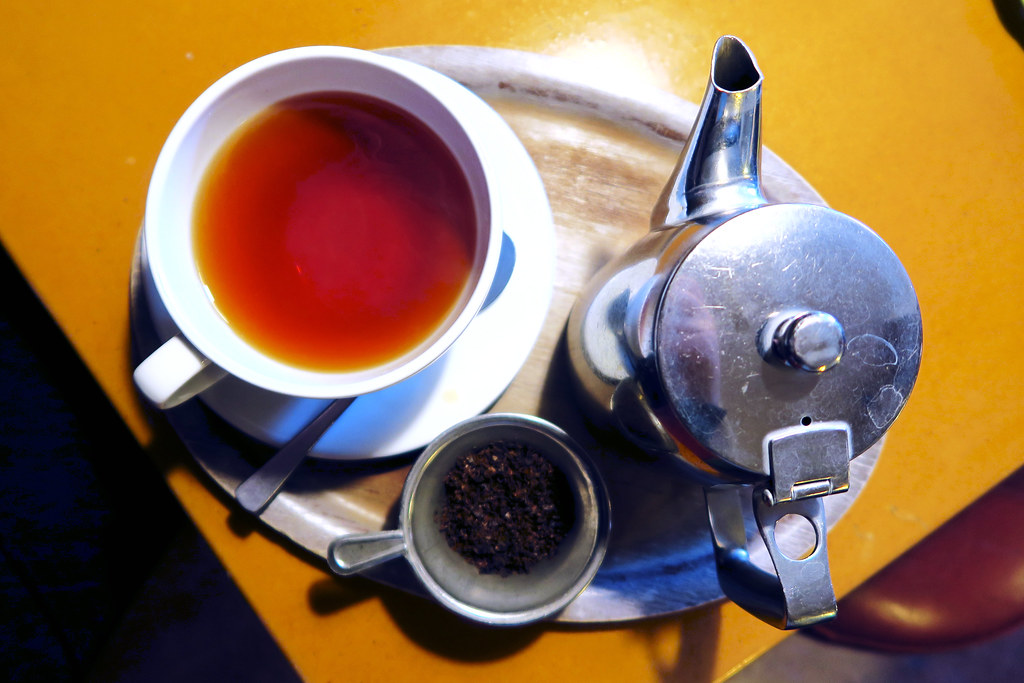 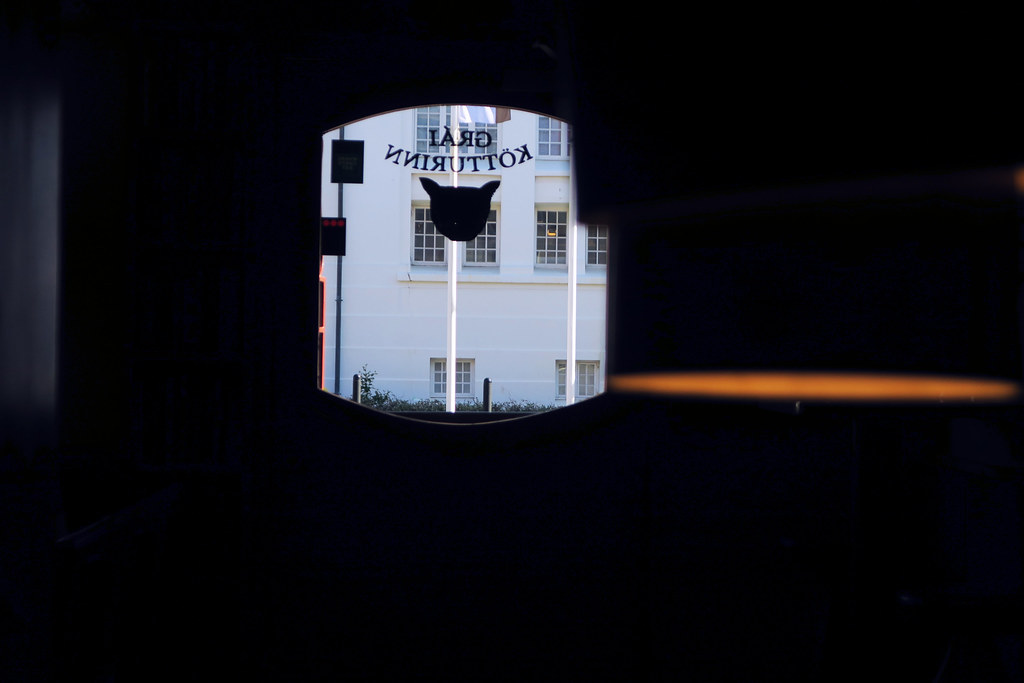 We only stopped at Drekinn to grab a soft drink on our way back from Hallgrímskirkja early one evening. We found that it was like a local newsagent with shelves adorned with chocolates, sweets and crisps, fridges full of fizzy drinks and alcohol and tobacco behind the counter. But what was also behind the counter was essentially a kebab shop or the inside of a burger van! We never had the opportunity to eat from there, but I thought it deserved a mention as we didn’t see much other fast-food like it and found it so odd and quirky. I believe they’re open until late too, which is great if cheap and greasy food is the only thing that’s going to satisfy your hunger after a drink or two! 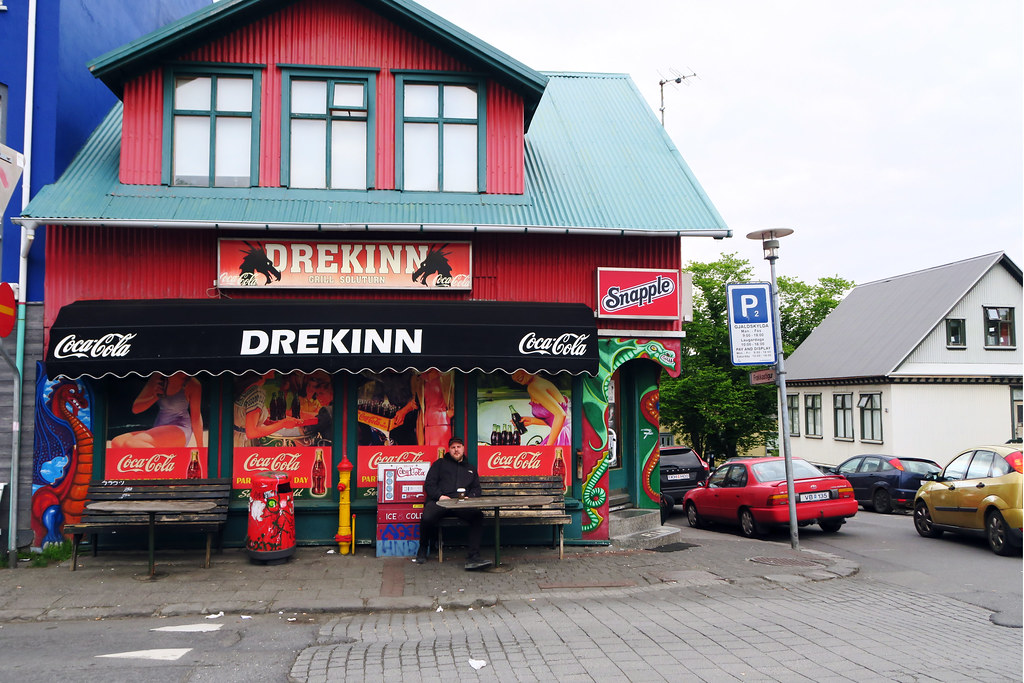 As you can see, our appetites were definitely left satisfied after our time in Reykjavik. If you’ve ever been, I’d love to know your top places to eat, in case we ever visit again! You can read more about our Summer Mini-Break to Iceland or checkout more posts in the Iceland tag, here.